The morning that Nathan proposed to me donned bright and sunny, despite the clouds and rain that were forecasted. We met at Logan & Mayzie’s house so we could pick Mayzie up, and then got Human Bean coffee on the way to pick up Logan from the fire station where he had worked the day/night before. After a quick stop at Safeway for snacks, we headed out toward our favorite mountain!

This mountain is our favorite because it’s the same mountain that we hiked the day we first met. So it’s always been incredibly special to us (I even wear a necklace with the date we met and the coordinates of our mountain, just cause I’m sentimental like that), but it became just *that* much more special on March 31st. 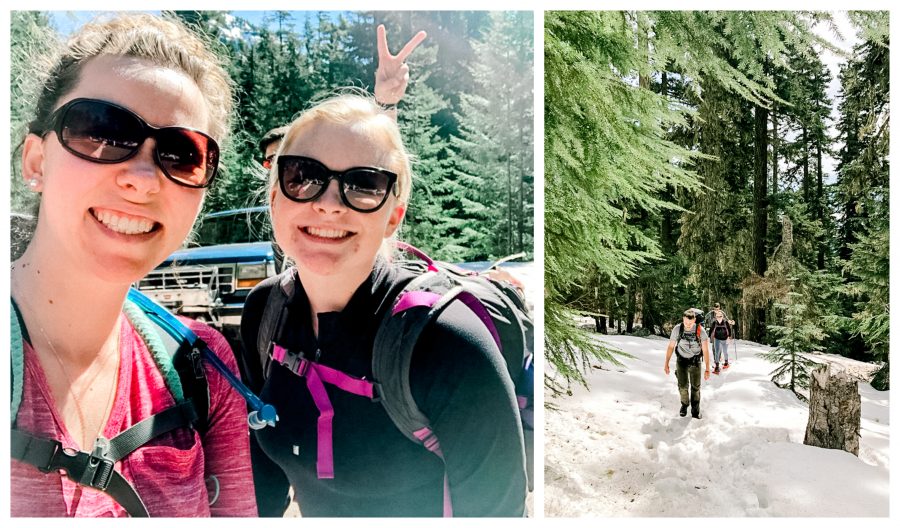 We drove the winding roads up to the top of the pass, found a spot to park, and began our hike up. 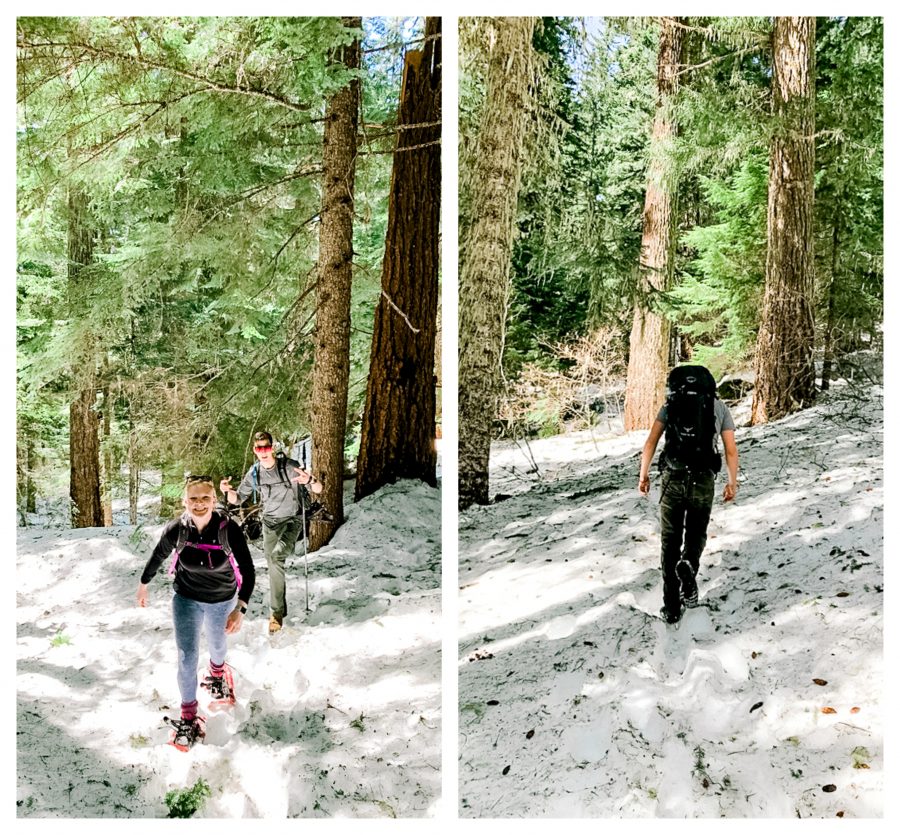 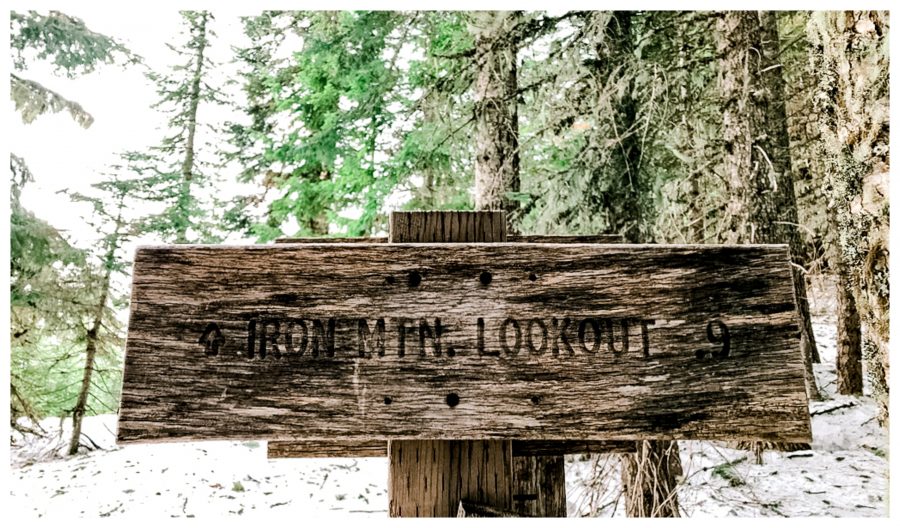 Now, I’ve hiked that mountain a good many times…but never in the snow. And I really hate not having control of my feet, so hiking a mountain made of a snow drift felt a little more than a little sketchy at times. But it all turned out okay, and I think the only injury we ended up with is the huge bruise on my leg, so I’d say we did pretty good! 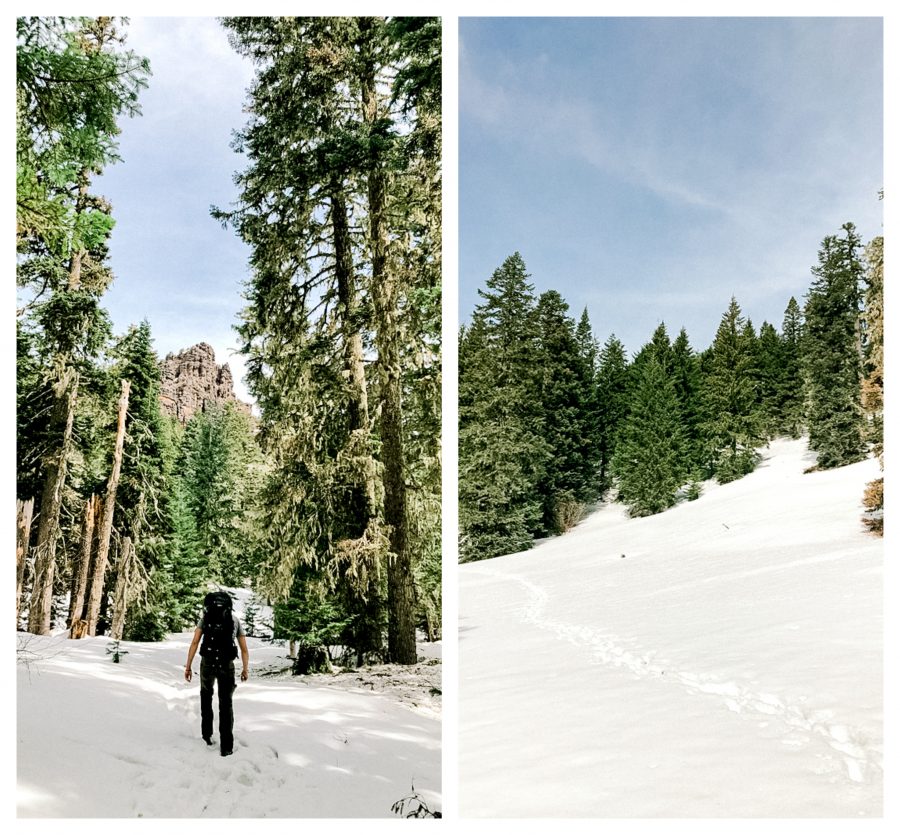 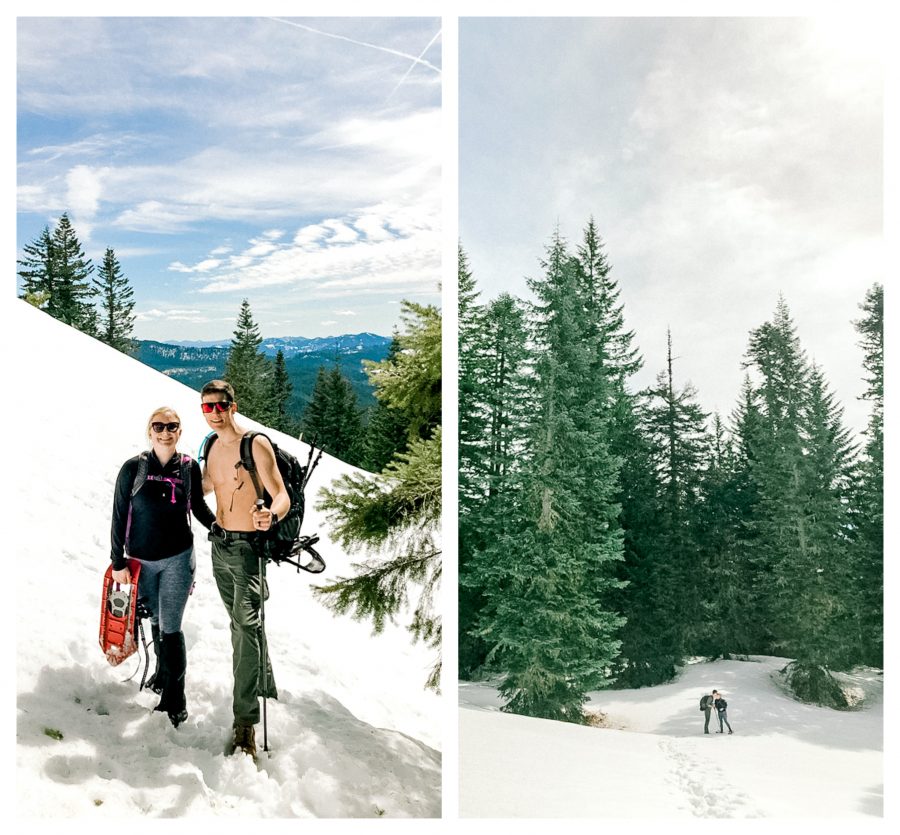 The guys didn’t even bother to put their snowshoes on, and after a few switchbacks, Mayzie and I decided to ditch ours as well. I’m not really sure that it made the hike any easier, but then again I’m not sure anything would have made it easier. Other than a spring thaw. 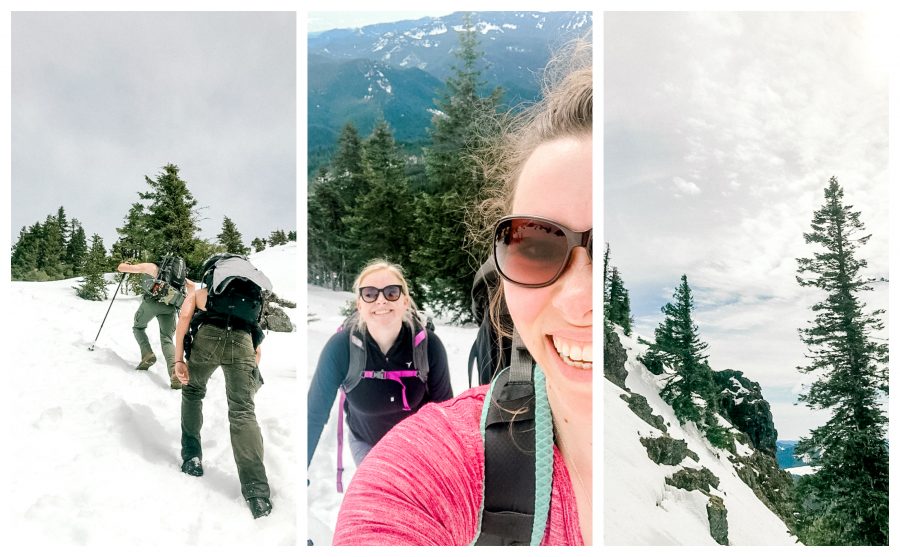 We *finally* reached the top, and were greeted with a view that made all the agony more than worth it. Snow capped mountains stretch out before us, and the clouds looked like they had been placed in the sky with just a few strokes of a paintbrush. 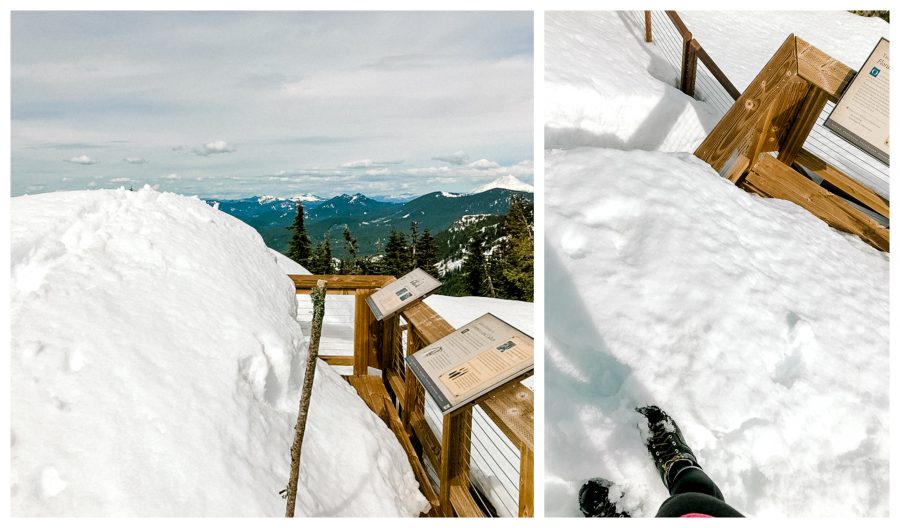 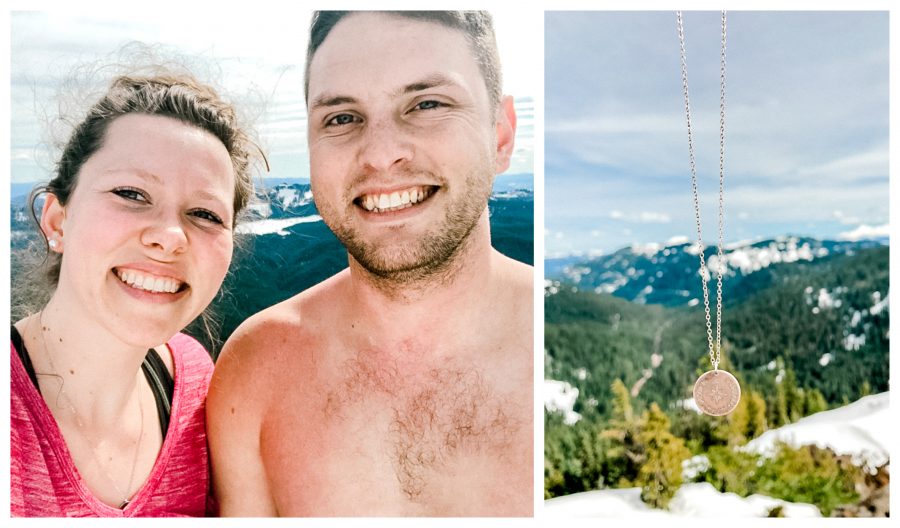 After a little bit, the guys started exploring, and I decided to walk down the trail a little ways to my absolute favorite spot.

One of my favorite things about hiking is when you get to the top after a hard climb, and you get to soak in God’s amazing creation. That’s one of the reasons I really dislike popular hikes (or even hiking with a lot of people) because you don’t really get any solitude. I’m definitely an introvert, and often thrive on just being able to melt into the background and observe. And there is *nothing* more spectacular than doing that on top of a mountain. Just being able to sit and soak in the sheer majesty and beauty and quiet…well, it’s something you can’t describe with words. But for all my hiker and outdoor friends, y’all know exactly what I am talking about!

So there I was, sitting on the edge of a little cliff, just chatting with God and praising Him for everything stretch out before me.

I might have also been (okay, fine, I was) having a little pity party for myself and voicing my frustrations and desires to Him. I had been pretty sure that Nathan was going to propose that day, but the whole way up, he had done a really good job of throwing me off the scent. He asked me questions about what type of ring I wanted (even though I knew he already knew), asked me to send him some example photos, and asked if I was going to be super disappointed if I didn’t have a ring when I flew to California two days later. Even Logan & Mayzie joined in at different points with comments that threw me off the scent! So while I had been pretty sure at the beginning of the day that he *was* going to propose on top of our mountain, between everything that was said on the way up and the fact that we had been up there for a while with nada happening, I was almost 100% sure it wasn’t going to happen after all.

I talked to Jesus about it, expressed the desires of my heart that I had expressed so many times before, asked that He help me to just enjoy the time that I had and this beautiful place I was in, and thanked Him that I even had such a man in my life.

I could see Nathan and Logan & Mayzie over on the platform (which was almost completely covered in snow, by the way) and I noticed that Nathan had put his shirt back on. Kinda weird, I thought (we were all enjoying soaking up the sun as much as possible) but I didn’t give it much more thought than that.

Pretty soon, he started to make his way down the trail toward me. It brought back memories of 953 days prior when we first hiked that mountain together, and I sat in the same spot as he came down the same trail and went clamoring down the cliff in front of me. It was only a few minutes after that when my cousin Caleb said “sooo, you’re single. And Nathan is single…” to which I replied something along the lines of “ummmm nope. He’s too much of a daredevil.” Famous last words.

Fast forward to last Sunday, that daredevil came and sat down beside me and asked how I was doing, and what I was thinking about. We talked about the mountains and how I wasn’t looking forward to the hike back down, and other stuff that I don’t really remember because I just kept thinking, “don’t let on how disappointed you are that he hasn’t proposed!”

Finally he asked if I was ready to go back and join Logan & Mayzie, and I said yeah sure. If I would have know what was coming, I would have raced him to the top!!

We got back up to the platform, climbed the little hill of snow, (which suspiciously had a spot of packed snow at the top, but honestly I really didn’t think it was put there for a specific purpose) and walked down the other side to the area of the platform that was actually bare wood. Mayzie had pulled out some goldfish, and both Logan and I had big handfuls when she said, “hey we should take a selfie up top!!” I think we both answered at the same time something along the lines of, “well let us at least finish our fish!”

I dusted off my hands and then turned and started walking up the little hill. Of all the moments throughout the day leading up to that point, I think this was the only moment that I really and truly was not expecting anything at all.

The next few minutes were a beautiful and exciting blur, but here’s how I remember it going down. (And yes, I had to confirm with Nathan on a few points after the fact.)

I got to the top of the little hill with Nathan right behind me, and as I turned around, I noticed Logan & Mayzie were still down at the bottom. But then my attention was completely grabbed by the fact that Nathan had the biggest smile on his face and was holding a little black box in his hand. 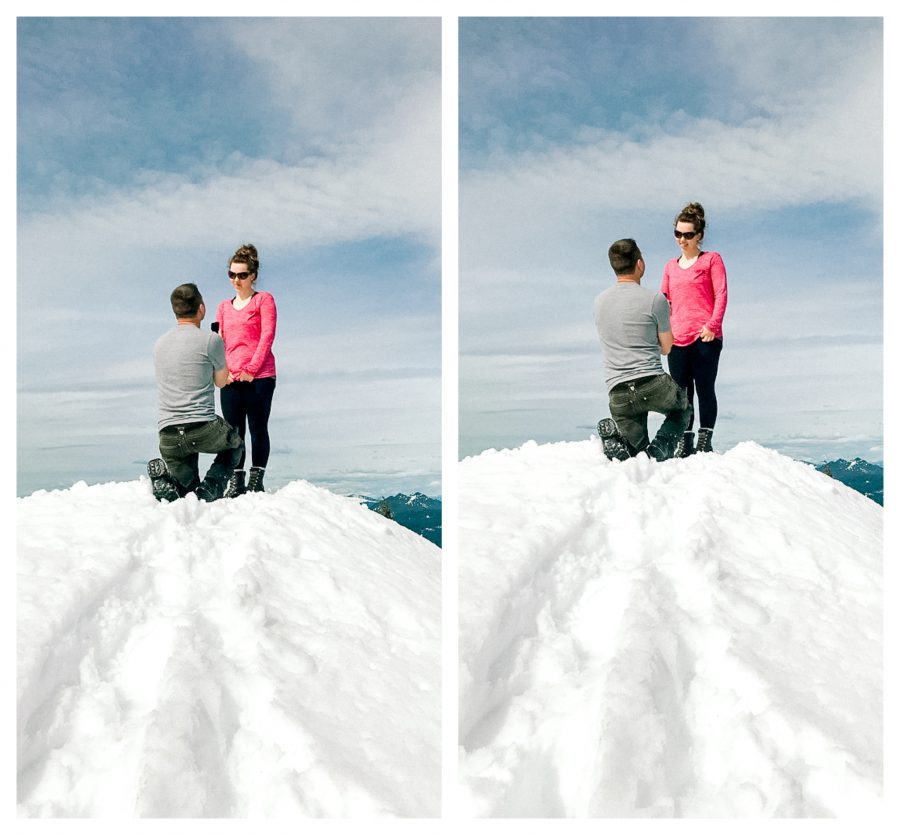 Then he was down on one knee, and saying, “Rebekah Leona Straw, will you marry me?”

In my peripheral vision, I could see Logan & Mayzie paparazzing (is that even a word?) it up, and I could see a ring in that little black box that was now opened. But all I was focused on was Nathan’s blue eyes and the fact that this was really and truly actually finally happening.

I don’t think he had even gotten all the words out of his mouth before I said “yessss!” with the biggest smile on my face and tears in my eyes. I reached for him and he held me tight and the realization of what was happening started to sink in. At some point, he asked if I wanted to see the ring (cause I hadn’t even given it a glance up to this point) and I said in a minute. There were more important things to do at that moment (like hugging my FIANCE!!) than look at a ring. 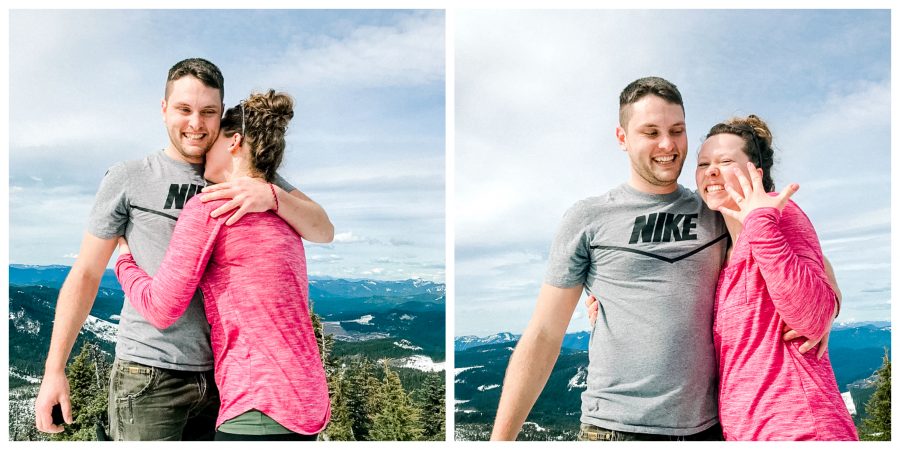 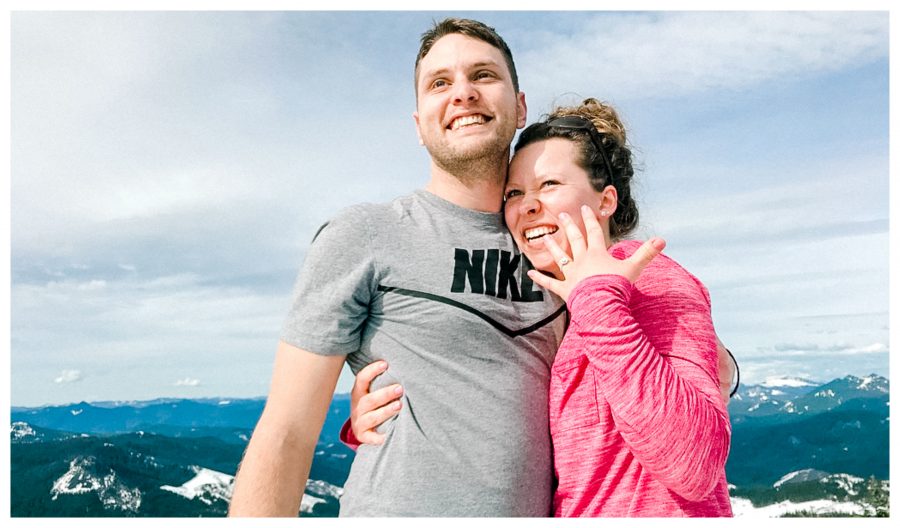 I did finally pull back and look down at that little black box, and saw the most gorgeous ring ever. I mean seriously, this ring is stunning! (And nope, I’m not biased. At all.) He slid it onto my finger, and I gave him another squeeze hug as I grinned from ear to ear at our paparazzi. 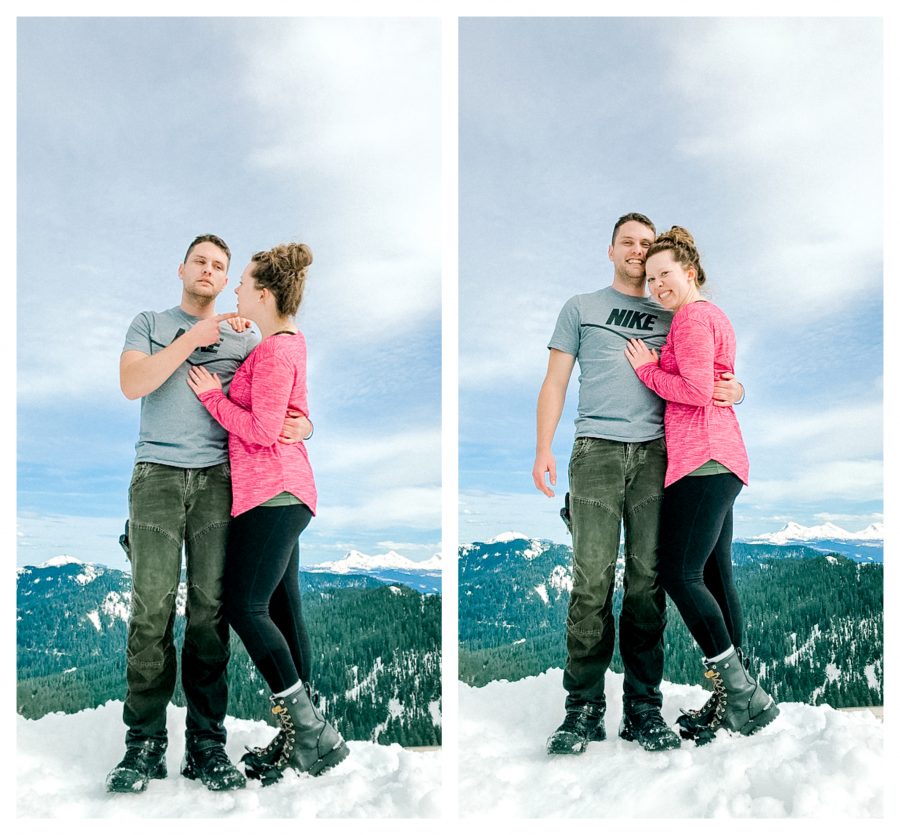 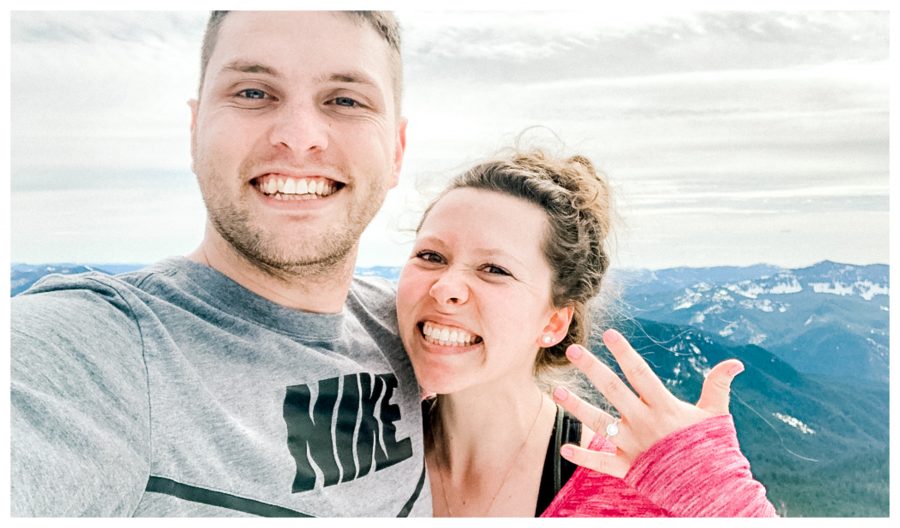 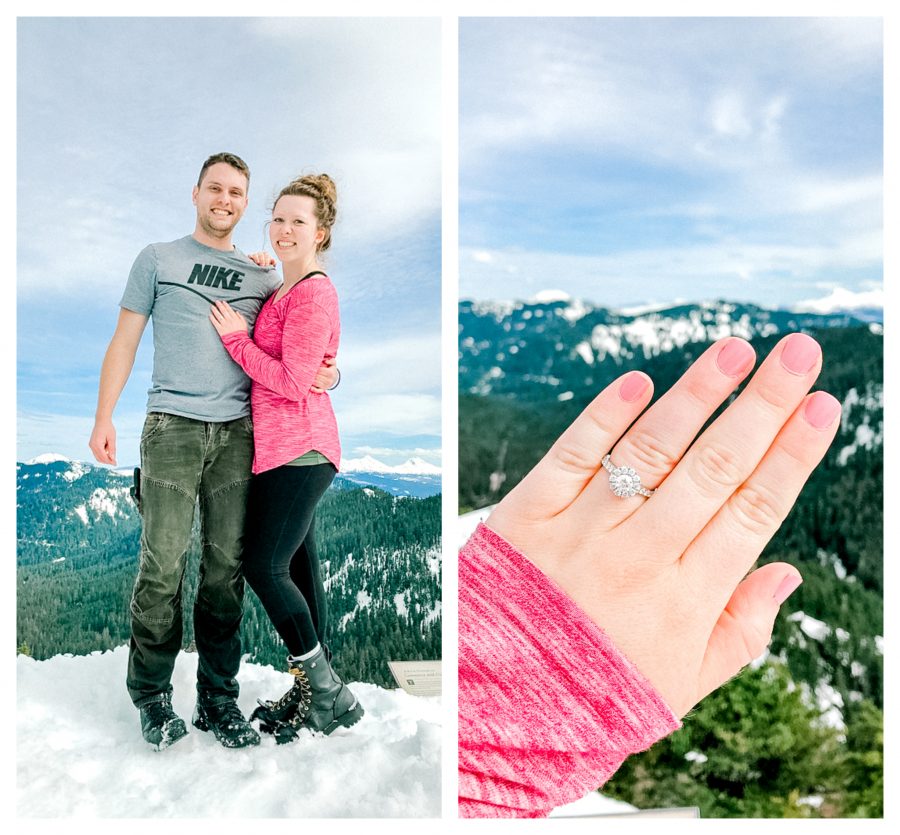 After that, Mayzie took a few photos for us (thanks girl!!), we took a couple selfies, I took about 50 ring selfies (gotta show off that bliiiing!), and then I started calling and texting people. Nathan commented that he thinks the girl friends of a girl who gets engaged are just as excited as the newly engaged girl herself, which is probably true. There was a lot of squealing on the phone when I called certain people!!

While I was making those phone calls and sending texts (and staring at my ring, obviously), another couple made it to the summit as well, and right before we started back down, they offered to take a group photo for us. I’ll always treasure that photo (well, and all the ones that were taken that day!) and am so thankful that Logan & Mayzie were a part of that day. (I know I have said it before, but thank you guys!!!)

I think it was about an hour and a half after the proposal when we finally started making our way down the mountain. Let’s just say it was a little hairy at times (remember that I *hate* not having control of my feet, so snow drifts and going downhill in said snow drifts…yeah, enough said) but we all made it down without too many injuries! At one point, my leg got caught between some sneaky under-the-snow branches, and my fiancé (still so weird to call him that) had to come rescue me. I ended up with a big, beautiful bruise on my leg, and I think I strained or maybe pulled a muscle in my hamstring, but ya know? It was an adventure and it could have been worse!! 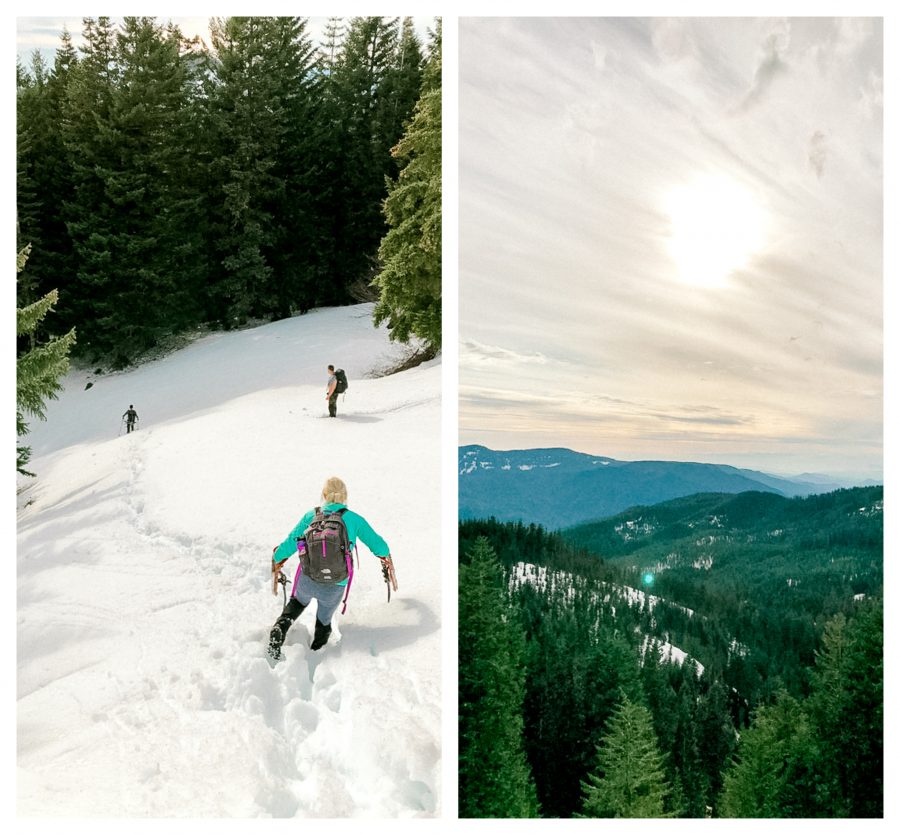 We got back to the parking lot a little wet and tired and hungry (although the guys said they were ready to turn around and do it all over again), and I alternated between looking at pictures, staring at my ring, and grinning at my fiancé the whole way back into town.

The night ended with dinner at Red Robin (with lots more staring at my ring of course) and sharing the happy news on social media. I don’t think I’ve ever written “thank you!” so much in such a short time span, but I am so appreciative of all the congratulations and well wishes that we have received! We’re so, so excited and cannot wait to be married! 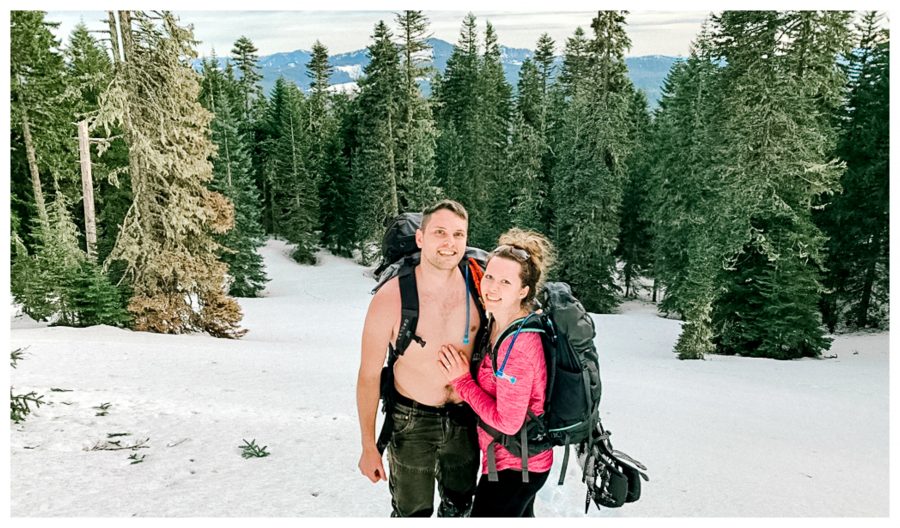 We're back home from our camping trip which means

Annnddd we’re off! 🏕 Five days in the wilder

My husband and I are currently up to our eyeballs

This sweet family session is on the blog today!

“…And if words cannot repay the debt we owe th

I’m off to meet with one my my fall brides, and